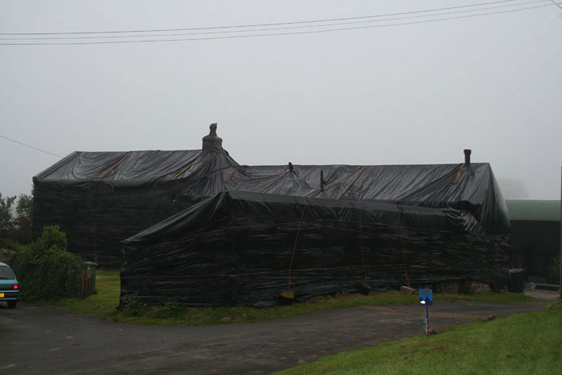 
Is farming as we have always known it, all wrapped up? 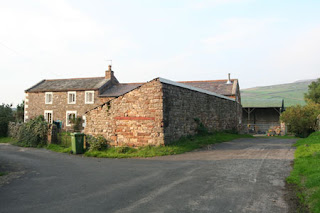 A whole farmhouse in the Eden Valley, was entirely wrapped in black plastic, representing the plight of the hill farm.

As an 87 year old farmer's wife was finally moved out of the farmhouse, for the family, as with most of the community, came the realisation that this was the end of an era. But do all of us, now urban creatures, realize the full implications? Do we realise that the countryside we all so love to visit, can only survive if farming does? - and this does not mean 'argi-business' and the eroding wasteland that results.

Like a large silage mound or haystack, the house was wrapped in black plastic sheeting and tied up with bailer twine. Monumental and strangely sinister, Croft Farm presented a dark and ominous shape on the landscape.

Oct 10 2008 by Tony Henderson, The Journal. A WIDE-ranging examination into the problems and prospects for upland communities was launched yesterday. The inquiry was set in motion by Dr Stuart Burgess, the Government’s Rural Advocate and chairman of the Commission for Rural Communities, and was expected to last over a year.

The Journal reported how artist Ettie Spencer encased her family’s Cumbria hill farmhouse in black plastic and bailer twine. The project, at Croft Farm at Scarrowmanwick, between Brampton and Alston, highlighted her fears for the future of small farms and for the future of the northern uplands.

The inquiry was to look at issues including the struggle faced by hill farmers to remain viable, the impact of tourism, how information technology is changing lifestyles, the change in subsidies and grants, social migration and environmental issues. The drive to examine the extent of problems and come up with solutions was launched at the North West Rural Affairs Forum’s annual conference in Cumbria, which has the highest proportion of severely disadvantaged upland areas in England.