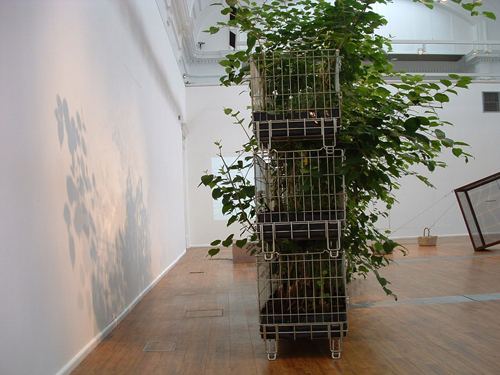 There is huge concern about Japanese Knotweed - the 'alien' species that is 'invading' a lot of our common land. Its seeds are sterile because the plants are all cloned from a single female and it is therefore spread only by fragments of the root system. It has been described as 'the largest female in the world' and, when left unchecked, it dominates its environment to the detriment of native and other species.

It has long been our practice to ‘control’ some infestations and to encourage others. In fact, our whole landscape is shaped by imported plants and animals, and our eco-system is dependant upon them all. This aspect of the work finds timely parallels with the paranoia surrounding the influx of 'aliens' or human incomers into this country (many of whom have been encouraged to come here to provide much needed labour and skills) and the concerns of some people that these incomers are taking over our resources.

The artist questions whether this mistrust and paranoia taps into a more fundamental fear that as we steadily take more from the planet, there is a very real possibility that (mother) nature will eventually retaliate and ultimately win the battle for survival. 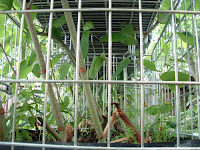 The caged plants signify the futility of a belief that we can exert control over our natural world. Growing at a phenomenal rate, the plants simply adapt and burst out of the cages, existing and thriving despite their containment. They are surprisingly attractive and even elegant to look at, until the implications of an escape and infestation are made clear to the viewer, suddenly imbuing the plants with a repellant, sinister quality. This work comments both on the way our visual tastes are formed and on the nature and function of prejudice.