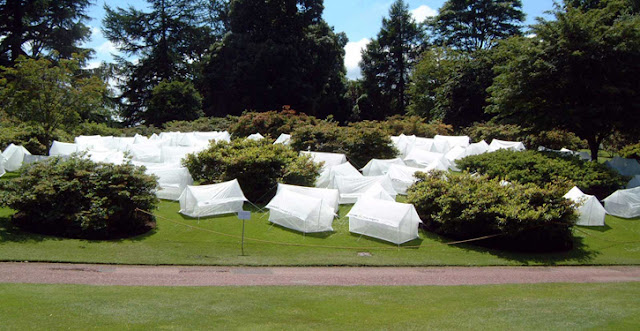 An installation in The Royal Botanical Gardens, Edinburgh.

WHAT? An encampment of seventy-nine tents on the lawn overlooking the main glasshouses. Printed on the fly-sheets of the tents were the names of plants from all over the world (in English and Latin)

The material was porous and semi-transparent, very strong and light as air so that any breeze set the tents dancing and billowing, catching the sunlight and shimmering like a seascape.

The project was concerned with issues about displacement in the contemporary world. The use of tents referred to not only the fact that vast numbers of the world's population have been forcibly displaced but also to our increasing dislocation from the natural world and thus to sustainability.

Tents were used here as a metaphor not just for temporality and as representing shelter, but also as a kind of skin which protects our inner selves from the harsh outer world. However, like our own skin, these tents were not infallible. In this case, they let in light and water, and yet by so doing, they allowed things to grow inside. As 'one man' tents they emphasised our separateness, and yet placed close together with their guy ropes intermingled in a haphazard mesh, our chaotic interdependence.

Alan Watts says in 'The Book. On the Taboo Against Knowing Who You Are' – '..the prevalent sensation of oneself as a separate ego enclosed in a bag of skin is a hallucination…….This hallucination underlies the misuse of technology for the violent subjugation of man’s natural environment and consequently, its eventual destruction.' p.ix

The placing of this work in the Botanical Gardens, amongst the thousands of plants displaced relocated and nurtured from all over the world, posed a question. Are movements of people a threat, or a chance for an enriched world culture? The work made reference to the political and environmental issues underlying the consequences of the movement and displacement of plants and vegetation, and how the lives of people have been fundamentally shaped through this process, both positively and negatively. 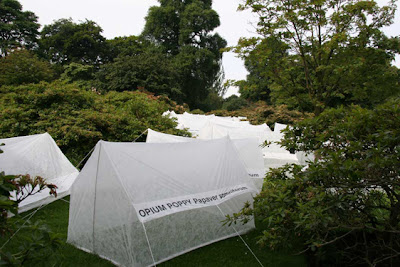 Inverewe Garden, Wester Ross for August and September 2008, then on to The Borders. 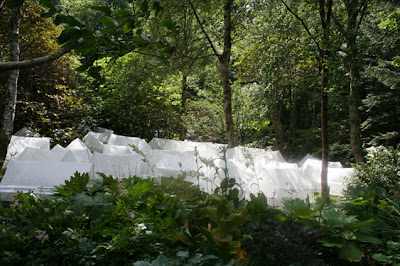 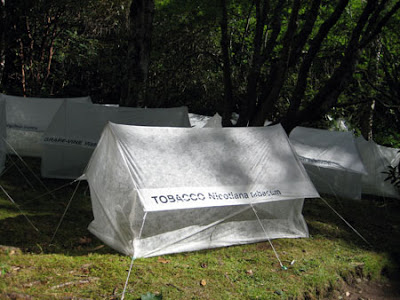 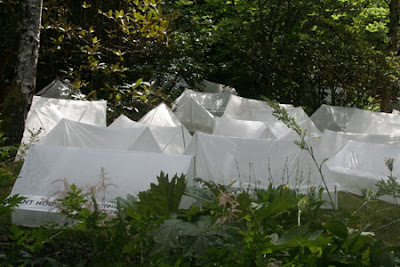